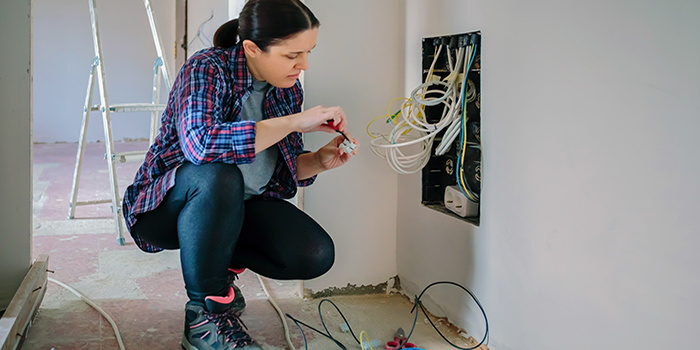 You may have heard of a few electrical terms, but do you know what they all mean? There’s a good chance that you do. There are some basic electrical terms you may not be familiar with, including the term “spike.” Listed below are some common examples of electrical terms and their definitions. The spike is a short period of increased voltage lasting one-half of a cycle. Static electricity is a result of friction between dissimilar materials. Transformers are important for lowering transmission voltages to make them available to customers. Switches are essential components used in a variety of electrical circuits. Switches allow you to connect or disconnect different electrical circuits. Thermography measures the amount of heat an object emits. The process is recorded photographically. Talk to an electrician at Video Chat a Pro if you have concerns about your home’s electrical system.

One of the 50 most common electrical terms is insulation. Different types of insulation serve different functions, enabling the circuit to function and protecting the user from dangerous voltages. Insulation can only withstand a certain voltage for a limited period of time before it breaks down. This voltage is often labeled as the isolation voltage. The recommended working voltage is the voltage level at which an insulator will protect the user from electric shock.
Early in-home wiring systems used braided wire sheaths and a knob-and-tube system to protect wires from wood beams. As technology changed, insulation materials evolved from rubber to complex polymers. Some materials are also used in portable electrical equipment. Most electrical equipment is insulated to protect the user from the elements. If you’re wondering which electrical term to choose, consider this article’s guide. Live chat with a professional electrician at Video Chat a Pro for expert guidance.
There is no such material as an absolute insulator. All insulators contain charge carriers, and when an extremely high voltage is applied, the carrier of those electrons breaks free and the insulator becomes electrically conductive. High resistivity materials are excellent electrical insulators, but they’re not perfect. Even materials with lower bulk resistivity are still effective enough to prevent significant current flow at normal voltages.
In the mid-1840s, Samuel F.B. Morse developed the first telegraph. He used a flat wood board underneath the apparatus. Glass became the primary type of insulator during the 1840s. However, at that time, electricians often used gas light fixtures as insulators to hold electrical lines. The sparks were visible even during thunder storms, and it was a highly unprofessional way to install wires. Questions about your home’s wiring? Talk to an electrician at Video Chat a Pro for clear and concise answers.

The basic electrical definition of a conductor is a material that allows electrons to move freely. All materials have two overlapping bands called the valence and conduction bands. A conductor allows electrons to move from one to the other when a minimal voltage is applied. The outer electrons are free to move and do not have a fixed attachment to the atom. External voltage can move these outer electrons into the conduction band.
The charge in a material depends on its material. Objects made of metal, for example, are conductors. The movement of electrons is the main mechanism of charge transfer. Until overall repulsive forces are minimized, a charged object will distribute its charge. Its behavior is different than that of a solid, which is not conductive. It is important to remember that a charged object will always disperse its charge.
A material can be either a conductor or an insulator. Conductors conduct electricity, while insulators do not. Both types have the same electrical properties, but the main difference between them is their resistance. As an insulator, a material has a high resistance to electricity, while a conductor has zero resistance. These differences are reflected in their names. Metals are the most common conductors of electricity, followed by semiconductors, plasmas, and electrolytes. In addition to these materials, non-metallic materials include graphite and conductive polymers. Further, the temperature of a material also affects its ability to conduct electricity. This causes heat to be generated by the flow of electrical currents. So, if you’re trying to conduct electricity, know what a conductor is and how it functions.

A resistor is an electrical component that opposes the flow of an electric current. These devices are often marked with a label starting with the letter “R.” Surface-mount resistors are commonly found on circuit boards, but they do not appear as black chips. The symbol for a resistor is a rectangular box or zigzag line. There are many different types of resistors, and each has a different construction.
Unlike capacitors, resistors dissipate power, making them useful devices for electronic circuits. While their size is not a direct indication of their resistance, it does help to know their approximate power ratings. Generally speaking, the larger the resistor, the higher the power dissipation. The resistor symbol can designate non-specific loads.
A resistor is an electrical component that is made from a metal or ceramic element. A resistor can have one or more types of resistive elements, such as wires or semiconductors. Resistors are typically categorized by their size, shape, or application. A typical resistor is typically 1/4 or 1/2 watt. A larger resistor may be rated for up to
1000 watts.
A resistor is one of 50 common electrical terms and can refer to a resistive element. The difference between a thick film resistor and a thin film resistor is in the thickness of the conductive element. A thick film resistor will typically have a much greater thickness than a thin one. This thickness, however, makes it a less useful component for high-frequency applications. The thickness of the film also matters.
If you need specific help with your home’s wiring, contact a live chat electrician at Video Chat a Pro.

One of the most common electrical terms is circuit breaker, which is a type of electric breaker that terminates all current on the system in an instant. The mechanism that tripped the circuit breaker extinguishes the arc within thirty to 150 milliseconds. Circuit breakers are graded according to their maximum current value and let-through energy. They are also rated according to their normal current and short-circuit current, which is called ampere interrupting capacity.
Circuit breakers come in a variety of shapes and sizes. The smallest ones protect single household appliances, while larger circuit breakers protect entire cities. A circuit breaker is sometimes abbreviated as an OCPD (Over Current Protection Device).
Another common electrical term is arc fault circuit interrupter (AFI). This is a type of special receptacle that automatically opens the circuit if an arc occurs. This prevents electrical fires. Finally, capacitor is a passive two-terminal electrical component that stores electrical energy. A circuit is comprised of two or more circuits. The circuit breaker can be either series or parallel. A circuit breaker can be used to prevent an overcurrent situation or to restore normal service.
A circuit breaker will also trip if there is too much power on one circuit. This can occur if water is placed between two wires. An overloaded circuit will cause the wiring to heat up, potentially causing a fire. The breaker will trip as a result of the excess heat running through the circuit. You must make sure that the circuit breaker is always working properly before attempting to repair an overloaded circuit. Live chat with a professional electrician at Video Chat a Pro to resolve any issues you might have with your home’s wiring.

The magnetic field of a solenoid is radially uniform but can vary longitudinally. The magnetic field is produced when current flows through a solenoid. In an electrical circuit, a solenoid is a switch that regulates the current flow of another device. It’s an important part of a power system.
The solenoid is a coil of wire that is used to switch power. You might have heard of solenoids from motorbikes, electric starters, and sprinkler valves, among other things. Solenoid coils are a versatile tool used in all kinds of automated equipment. They work by wrapping a wire around a hollow piston or coil. Copper or aluminum wire is used to construct solenoids.
The most common type of solenoid coil is the three-way solenoid, which has three ports and two openings. This type of solenoid is used in less hostile environments. It’s a cheap, efficient design, and offers exceptional performance. It’s used in single and double-acting solenoid valve actuators. A molded solenoid is a tough and durable option that is perfect for outdoor applications.
The solenoid is a basic electronic device that converts electrical energy to linear mechanical energy. Its essential components include a ferrous plunger, stop, and a frame. The plunger travels through the shaft until it makes contact with the stop, which causes the armature to move back. In addition to the plunger, the frame can also amplify the magnetic force. This magnetic field then causes the plunger to retract.
Do you still have questions about your home’s electrical system? Video Chat a Pro offers assistance from virtual electricians.